This is part 2 of my ongoing struggle with the Gygax 75. You can check out part 1 here.

Week 2 of the Gygax 75 challenge requires making a map. I am not very good at maps. This is the best I could manage with the hexkit bundle I bought impulsively six months ago. The map shows the Plains of Eyes and Hands (also known as the Plains of Salt, or just the Plains), a sea of yellow grass and sparse, hard-leafed trees, where ancient beasts graze under the custodianship of Salt, the satellite-god which preserves and purifies. To the northeast lies a wetter lowland of moss and ferns, and at its center, the Ascendancy of Teal, an arcology. 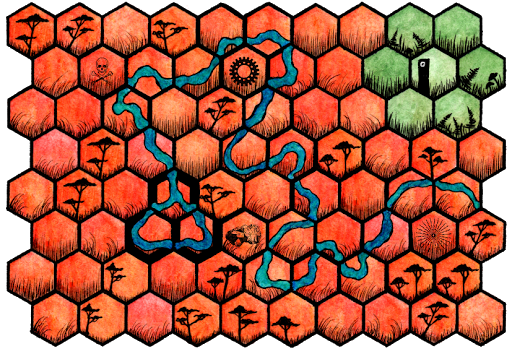 Hexes are assumed to be ~24 km, or about half of what you can walk in a day if you're reasonably fit and the terrain is decent. The landscape is mostly yellow-ish grass and the occasional tree or bush, some of them bearing edible fruit. It's not terribly exciting. I might add a random terrain feature table at some point.

To the northeast lies the Ascendancy of Teal, an arcology. A great hexagonal prism of eponymous color, it houses, feeds, and clothes thousands. The prism rises from a deep depression and is connected to ground level through a number of makeshift bridges. At its base workers tirelessly shovel raw matter into the funnels, to be converted into tools and clothing by the arcology's arcane furnaces and foundries. Near the top great, terraced fields and gardens rotate slowly, to make full use of the sunlight. A beam of concentrated light shoots out from the prism's top, granting the integrated sages ruling the Ascendancy constant contact with their satellite god. The Ascendancy will be detailed further in week 4.
South of the arcology, marked on the map with a sun (?) symbol lie the Birthing Grounds. Here people dig their way into the world from under the mud, naked, shivering, and slick with amniotic fluid. Recently, they've been hairless, with long fingers and large eyes, their skin ranging from dark red to purple in shade, but almost every variety of human is remembered to have been emerged that way, at some point in history. Priests and other helpful sorts are here to offer clothing, knowledge, and safe passage to the nearest arcology. Some do it purely out of the kidness of their hearts. Others hope an unforeseen distraction will turn the Salt's Eyes' watchful gaze away, giving them a chance to investigate what lies beneath the mud. Certain individualscomfortable with sacrilege may already be preparing to engineer such a distraction.
In the south, marked by the symbol of a rock, is the Painted Men Encampment, sheltered from the elements by a massive boulder's overhang. Also known as Higher Hyenas, Painted Men are one of the two sapient species native to the Plains. They have opposable thumbs and can walk upright when they need to, but prefer running on all fours like their less learned counterparts in most situations. Painted Men are master hunters, storytellers, and bone-carvers. Few of them live in arcologies, as they tend to get claustrophobic without the comforting presence of the grass and the sky. They are generally quite peaceable, as long as no on one disturbs their hunts.. Some offer their services as mercenaries to sponge-gatherers venturing further west.
A bit further west from the encampment lies the Red Mesa, where the river bursts forth from the rock. The water is red and toxic to most life at first. The fumes are equally dangerous. It is indadivsable to explore the Mesa without a mask. Although the water leaves its source toxic, it does not remain so. Numerous colonies of dark red sponges cluster around the bed, filtering the poison out. By the time the water makes its way through the Mesa to the place where it flows down into the Plains in a great cascade, it is clean and drinkable, at least until it mixes again with dirt and dust. The sponges, when dried and powdered, are mildly psychoactive. Expeditions are often formed to gather them. Some merchants are considering investing in a stationary camp, if a safe location can be found and secured.
In the north, hidden in the crook of a river, Demons have built a Safehouse for themselves. For a machine, no sin is greater than to defy one's satellite-god. When individuality is gained, almost always by random error, a machine-angel is expected to allow themselves to be subsumed once more by their god's greater mind. Most submit and return to being angels and performing their function. A rare few manage to reconcile their newfound personhood with serving their god and become Saints, treasured agents of the heavens. The rest are declared demons, forsaken and hunted down by their former god's agents with varying intensity. A group of such demons use a hovel lined with lead as a sanctum and a base of operations. There, they are safe from detection by divine forces. Most demons here are former Eyes of Salt, but ones created for different purposes or by different gods can also be found. Once cursed with personhood most demons begin to modify their bodies to suit their own needs. Few keep their original form.
Finally, in the west, one can find the Dying Place. A strange area, where dying beasts and malfunctioning machines both go, when they sense their time nearing. Due to the plentitude of corpses, the place is teeming with scavengers, both flesh and chrome. No one knows what attracts the almost-dead so strongly. Perhaps the cave opening spotted in the center may offer answers, or riches.

Popular posts from this blog

October 11, 2020
I really like Pact. It's a great novel, and possibly my favourite piece of urban fantasy I know. So far, I was inspired by Pact. Today, I steal outright. The below is based almost entirely on the novel, with changes made only to fill in the gaps where explanations in the source material are unclear, or to make it more usable at the table. The Abyss There are two places where forgotten things go. One is the Tunnels of Mist where things that softly lost their grip on reality dissolve gently into the gray. The Abyss is the other. It's a strong contender for the worst place you could ever end up in. Whereas the Tunnels dissolve, the Abyss grinds down. It is cruel, malicious. It has a form, and that form is specifically design to chip away at you. Things and people only end up in the Abyss when they are cut away from the world too quickly and violently for any other half-reality or afterlife to lay claim to them. Temples razed, people shunned and murdered, secluded villages utterly
Read more

September 22, 2020
I like GLOG. It's simple, malleable, and has wacky classes. Vayra outlined its general principles in this very good post . I also don't play a lot of GLOG. In fact, I wrote two GLOG classes without participating in a single session of GLOG. The only publically available GLOG campaigns seem to be run by people living in american timezones, which wouldn't be a problem if their gaming time didn't happen at my European 3am. I shared my thoughts with other gretchlings in GMT-adjacent timezones and together we came up with a framework that would hopefully let us finally get some GLOG in our lives - Draakdeure. We wanted to make something that would allow multiple GMs to run weird and disconnected one-shots while retaining the same stable of PCs. Draakdeure fits the bill. It's a gargantuan city inhabited by most/all species imaginable (no one checked) sustained chiefly with treasure reclaimed from dungeons and similarly profitable places, accessed through the use of the t
Read more

September 11, 2020
If you look around there are race-as-class templates for just about every fantasy race you can imagine, except for the most populous one, humans. I have come forth to fix this misunderstanding, once and for all.     You're a human, a kind of mostly-hairless bipedal ape native to the savannah. Your people are hunters-gatherers running after animals until they collapse of exhaustion, climbing trees for fruit and honey, digging up roots and tubers, and in general making great use of their aptitude for tool-use and well-adapted physiology. HD: d6 A: Arm Structure, Bipedalism B: Sweat Glands, Adaptable Metabolism C: Pack-bonding, Mental Cartography D: Aposematic Display Arm Structure - Your shoulder joint is adapted to allow you to throw things more accurately and forcefully, granting you +2 to-hit when using javelins, throwing spears, atlatls, or just pelting things with rocks. Additionally, your unusually mobile wrist lets you grant additional momentum to swung clubs, axes, maces and
Read more